Name: Aaron P
Date of Hunt: September 9-12, 2018
Location of Hunt: Northwest Colorado
Animal Hunted: Cow Elk
Were you successful?: No
Weather, Wind, and Conditions: Dry and warm.  Highs in the 70’s with lows in the upper 40’s.  Last day was very windy.

Interesting Details of the Hunt: This year I drew a cow tag for muzzleloader season here in Colorado.  After purchasing a CVA muzzleloader this summer and practicing with it, I was ready to go.  Colorado regulations require open sights for muzzleloaders, but with the possibility to hunt in the middle of the rut, I was excited to get out there and see what I could find.

Due to other commitments, I didn’t get out till the 3rd day of the season. The weather was warm and everything was incredibly dry.  While there was water here and there, it was noticeably brown and crunchy.  I found it impossible to walk quietly through the woods and so resigned myself that if I could not walk quietly through the woods, the animals would likely have to make noise as well.

As I hiked, I was pleasantly surprised about the lack of hunter pressure. This hunt was entirely on public land and in the past I found the area quite busy.  During my entire time hunting, I did not run into a single other hunter.  I heard that the weekend had been busy, but during the week, the entire area was empty.  I had the woods to myself!

Overall, I was able to hunt 3 days.  The first day I hiked to the top of the mountain.  After watching two does and two muley bucks work their way through a high meadow, I headed up in elevation where I thought the elk would be.  I saw a few bulls but only ones by themselves. I really didn’t see a lot of fresh sign.  It did not appear that any herd was up high.  It was great to see elk, but none of them were cows.

Day two I went down by private land and here I did locate a herd!   Working my way down over a ridge, I heard a bull bugling like crazy right over the edge.  As I stood there, I could hear multiple elk moving around in the grass.  I cow called lightly a couple of times and tried to determine a good attack strategy.  Before I could even move however, the wind swirled and took my scent right over the edge.  I heard the entire herd crash off through the woods.  The bull continued to bugle and so I followed them for a couple hours but could never get close enough to see them.  Eventually the bull went silent and I had to come up with another plan.

After giving up on that herd, I turned and went down through a large open grove of aspen.  As I came up over the hill, I was immediately hit with an incredibly strong scent of elk.  It was so strong I was convinced there had to be elk around.  I slowed down to a crawl and worked my way through the grove.  What I found was not elk, but the evidence of elk…..a LOT of elk.  I found beds and fresh dropping of a herd that must have been over 40 strong.  It was clear they were there that morning.  I had located where they had been, now I just need to find out where there were now.

My last day I tried one final big loop looking for cows.  The day started off exciting.  Right at first light, I called a spike all the way across the meadow and into 10 yards. While I would have loved for there to be a cow, it was still fun seeing elk.  After toying with him for a bit I headed up the hill.  I saw some sign and a number of rubs, but I never did see a cow elk.

I would like to say I found them, but after three days of hiking, I did not see one cow.   Every day I saw elk…. unfortunately it was all spikes and bulls.  It was as if the animals knew I had a cow tag. I saw a total of 8 spikes and 3 legal bulls.   Using only a cow call, I called in two different bulls.  Once was a nice 4×5 that came into 15 yards before he lost interested and walked away. 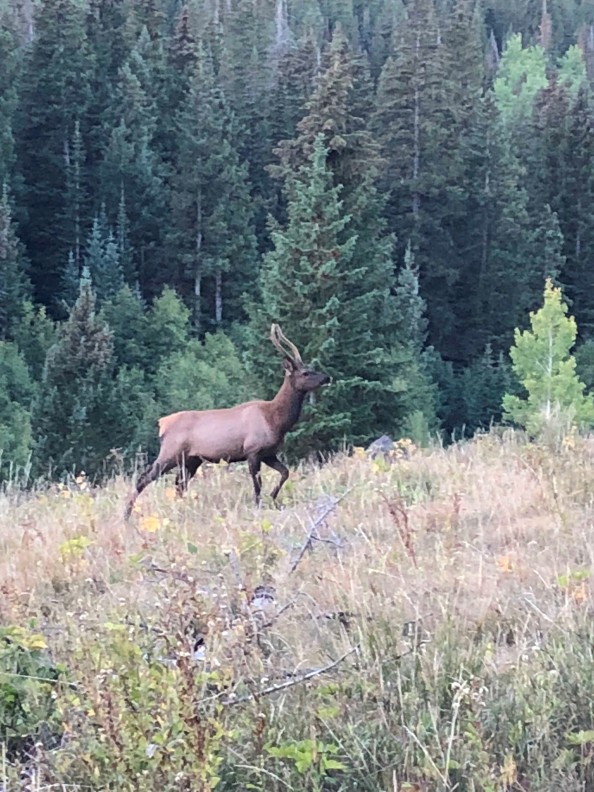 I ended my hunt disappointed that I couldn’t fill my tag, but with a lot of good memories and experiences.  I believe I will continue to explore muzzleloader season and may investigate getting a bull tag sometime here for this season.   I don’t know though…..I’ll probably only see cows then!