Interesting Details of the Hunt: After two weekends of poor weather, I was looking forward to getting out for turkey for the first time this season.  A friend had received permission for us to hunt on 40 acres of private land in central southern Colorado.  Last year I had come close to harvesting a bird on this property and so I knew there were a lot of turkeys around.  I was also looking forward to bringing my 6-year-old son along on his first “real” hunting trip.  We had gotten him camo pants and jacket and he was ready to go.

All week I was watching the weather.  While it looked decent towards the beginning of the week, as the weekend got closer, it was clear that conditions were not going to be good.  A cold front was moving through and we were to experience a snow/sleet mix all night with it not stopping till late morning.  The night before, my friend and I decided that it didn’t make sense to do an early morning hunt, but determined instead to leave late morning and see if we could catch any birds coming down after the snow stopped.    I must admit I wasn’t sad at all to sleep in bit more that Saturday morning.  With bringing my son as well, I was happy for the later start.

We arrived at the property shortly before 2:00 pm.  While the weather was clearing, a light snow was still falling. I had been hoping for better weather but we had seen few birds out in the field on the drive down and the property owner had also let us know the turkeys were moving around.  I was hopeful to see something on this hunt.

My son and I quickly headed into the woods and decided where to start.  I found a small clearing, set up a couple decoys, and got us settled against a tree.  My son seems to be just like me and struggled a bit sitting still. I don’t sit very well myself and I honestly expected him to struggle some.  To his credit, he tried to be quiet and sit still and overall did a great job.  While we sat there, I made a few calls and even let him use my box cutter to make a few yelps himself.

We picked up the decoys and headed to a new spot.  As we were walking, I spotted 2 toms in the field across the road.  They were not on the property but I hoped I could call them over.  We set up again and I started to call.  At my first call, the toms perked up….and ran off into the woods.  I don’t know if something else spooked them or if I need to work on my yelps, but they didn’t like something and I knew there weren’t coming my way.

We continued walking and I found a bare area where we found a single turkey feather.  My son was intrigued, but informed me he would rather see a real turkey. I was with him on that one!  Just about 50 yards further we set up again.  I put the two decoys on a bit of open ground and we settled against a tree again.  I made a couple calls but didn’t get any immediate response.  It looked like another possible dead end.

We were sitting there about 5 minutes when suddenly my son whispered, “Hey Dad!  There are a couple turkeys back there.”  My son was on his knees looking back to where we had just been.  I whirled around to look behind and sure enough, there were 3 turkeys just where we had been about 50 yards away!   They were eyeing the decoys and were slowly working their way towards us.

We were in the worse position possible.  My son was on his knees next to the tree and I was crouched up on my knees behind him.  From where the turkeys were, we were very exposed.  For all the wiggling around my son did earlier, when it counted, he was as still as a rock!  I whispered to him to not move and we watched for about 45 seconds as the birds slowly came out way.  I was agony to just sit there and watch.

Finally, the first bird stepped behind a tree for a brief second, and I quickly pulled my 12-gage up and took aim as he stepped out.  My poor son was right under me and didn’t even have a chance to plug his ears.  I took the shot and at 36 yards, the bird dropped to the ground.  My tag was filled after hunting for just over one hour.

In common turkey behavior that I had only read about, as soon as the bird dropped, the other two turkeys came running over to the one flopping around on the ground. We walked up to about 10 yards away from them while they stood there and looked foolish.  After a couple minutes of trying to determine what was happening, the two other birds headed off into the woods and my son and I examined our prize.

Not all trophies are big.  This turkey isn’t going to break any records.  It’s not a monster that you see in magazines. It was only a jake with basically no spurs and a beard that could easily be missed if you weren’t careful. It was a normal size and nothing really special about it.

And yet, I could not be happier.  Not only was it my first turkey, but I was able to experience it with my son!   He had a blast on this hunt and it will be a memory that we always get to share.

I hope that in the future I will get a big tom.  I hope that my son might be able to hunt himself someday.  I hope that this bird is the first on many through the years.

But I wouldn’t trade this one for the world! 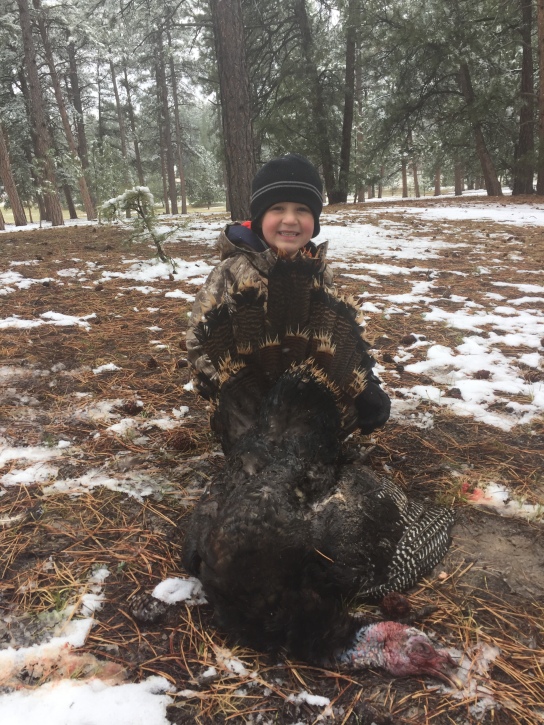