I recently was able to spend some time in Arizona.  After a interesting hiking experience the first week (read that adventure here), the second week I took yet another hike.  While I had a great time, it was no where as exciting as the week before.  I was hoping to spot some elk, but I ran out of daylight and could not get up to where I thought they might be.

My last day in Arizona, I ended up with a couple free hours and so I decided to drive up by the Grand Canyon.  While most people would want to see the Canyon, my goal was more to see elk!  Nothing against the Grand Canyon (I’ve been able to see it a number of times before), but this trip I wanted to see elk. 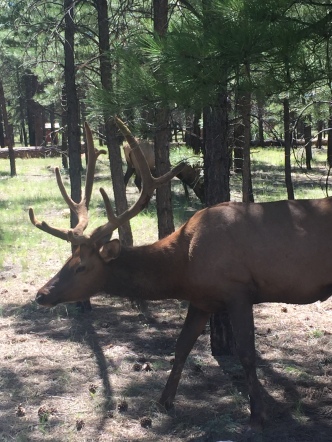 Last year my family had camped in a campground near the Grand Canyon and when we first drove in, 3 massive bulls had strolled across in front of us.  I headed back to the campground to see if those big boys were still there.

At first, I didn’t see anything.  It was in the upper 80’s and the middle of the afternoon.  I was hot myself and if I was an elk, I would have been tucked away in some shady spot waiting for evening.  I really didn’t expect to see anything so imagine my surprise when I spotted a couple bulls slowly grazing at the end of the campground. 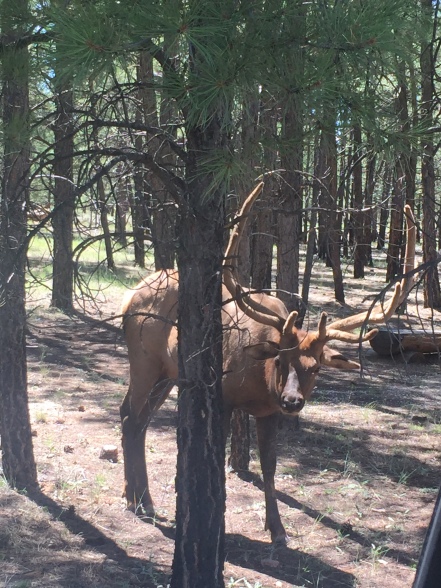 for a bit.  While they were not as big as the ones I saw last year, I still will take any opportunity to watch a bull.   I watched these three graze their way off behind the camp and I drove back happy to see some elk!