Interesting Details of the Hunt: My brother, Joshua, and I had been planning this day for months. We tried lots of different combinations of days and times I could come out to his place to hunt, but we came up with only one solution: I had only one day, and I had better make the most of it.
We woke up around 5:30 AM, got coffee made, and we got ready for the hunt. We put our Savage rifles in Josh’s dually pickup and headed out around 5:50. We arrived at the crack of 6 o’clock in the cold, dark morning. It was cold, around 20 degrees and everything we could see was covered in a thick, white layer of frost.
I climbed up into the tree stand and my brother sat in the pickup about 200 yards away over the hill, just in case I missed a shot at something. We were hunting on private land that we were granted access to, so we had the run of pretty much the whole place. The man who owned the land was another 200 yards away from me sitting in some thick bushes with his monstrous .308 Winchester Mag. So there we sat…waiting. The glow of the morning sun was just starting to show in the shadowed sky at 6:30…still waiting. I suddenly saw a big doe trot behind a tree line and disappear into a creek with more trees; a buck followed soon after. “Well, there goes my chance at getting anything in this freezing soup pot.” I thought.
I was ill-prepared for this weather, and as my toes were losing feeling,I knew I wasn’t going to last much longer…still waiting. Then to make it worse, a frosty breeze came up and started biting at my exposed skin. I wanted to be out of there, out of the cold, into the pickup where my coffee thermos was, but I knew if I wanted this long-planned-for trip to be a success, I’d need to stick it through. 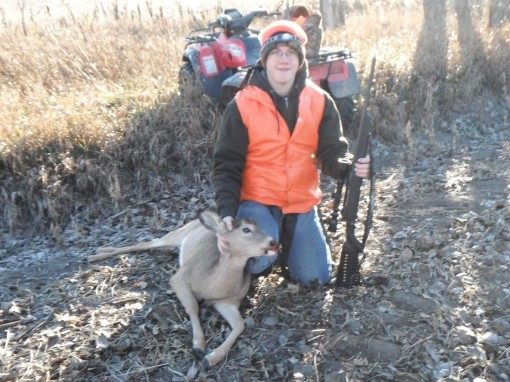 At 8:27 I sent Joshua a text on my phone asking when he’d relieve me from the cold and his reply was that I wait it out just a couple more minutes…holding on in the freezing wind is a lot easier said than done! The previously mentioned landowner had been driving every so often back and forth on his ATV to and from his waiting spot and the pickup, to get a refill on coffee, I assumed. After I received my text, he started up his four-wheeler yet again and following the roar of the engine something happened that I had been day-dreaming of for the past 2 1/2 hours; three does popped out of nowhere!

They took a steady trot towards the same creek I had seen the doe and buck disappear into 2 hours earlier. I took aim at a clearing at which I knew I could get a shot off at one and waited till they walked into my scope. One…two deer kept on trotting at a good speed. I dared not fire as all my previous kills from years past had been standing bone still. I watched them disappear. After seeing that, I started to loosen up when the third and last doe came into sight! By the grace of God, she stopped for 3 seconds! By then I had already had the cross-hairs of my .243 resting on her shoulder….KA-CRACK!!! She went down like a box of bricks, didn’t even take one step! Quickly I racked another round and took aim yet again to see if she’d get up, to no avail; she was deader than a doornail!

It was worth the wait and the miserable cold.