Interesting Details of the Hunt: I went up into the mountains for the 2nd rifle season in Colorado this year. The first two days of the hunt, while I heard a lot of shots around me, I didn’t see a single elk.  It seemed the elk were scattered and were in higher elevation and than typically.  While I spent 2 long days on my feet trying to locate any elk, basically all I saw were a couple of muley does and some friendly hunters. 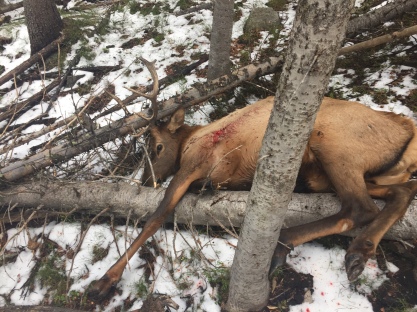 Day 3 of the hunt I decided to go to the very top of the mountain to see if I could locate anything.  At the top I saw tracks that were a couple of days old, but no fresh sign at all.  It had taken all morning to get up, so I decided to slowly work my way down back to camp.  The wind was blowing across the face of the mountain, so I could descend and not have the wind at my back.

Early afternoon I found myself in dark timber with dead-fall everywhere.  I picked out an old set of elk tracks and slowly followed them down through the mess. I wasn’t in any hurry so I took a step or two and then would pause and look.  at 1:40 I had just taken a couple steps when I looked directly below me and I saw 2 bulls standing up. They were at just 60 yards. They had been bedding down and had sensed something….but not sure what.  I could only see the back end of one as it looked to the left, but I could see a bit more of the one that looked to the right (downwind).  It stood there for a minute and then turned back and started walking left.  As it turned, I could see that it was a legal bull (4 points on one side) and as it stepped into a lane, I pulled the trigger. 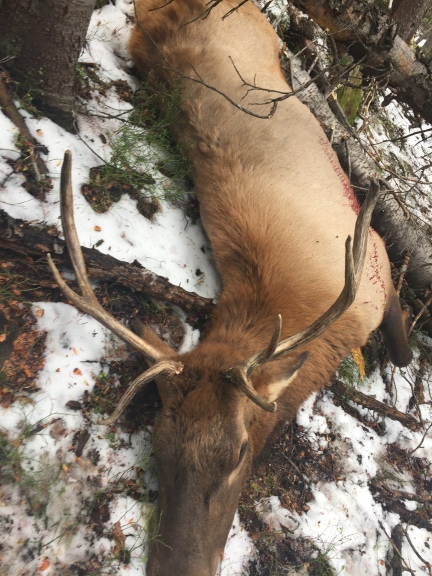 I saw the bull react to the shot and both bulls bolted straight down the hill.  I could hear branches breaking and the ground being tore up and they raced off.  Just a few seconds later I heard a tremendous crash and I was sure the bull was down.

I worked my way down to the spot where I shot it and followed the tracks down.  Not 50 yards down the mountain was my elk.  He had crashed into a tree and dead in the mess.

My shot had been just a bit forward and had got a portion of the shoulder, but had been a clear double-lung shot.  He was a little 3×5, but he was an bull elk!

This was my first bull elk and one that I did completely solo.  It was about 5 miles from camp and I quartered and carried it all out on my own.  Great experience and one that I will always remember! 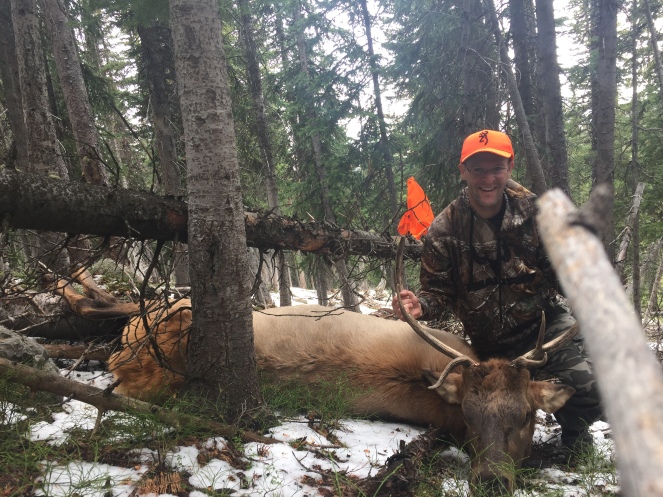